How To Remove And Prevent Bathroom Ceiling Mould 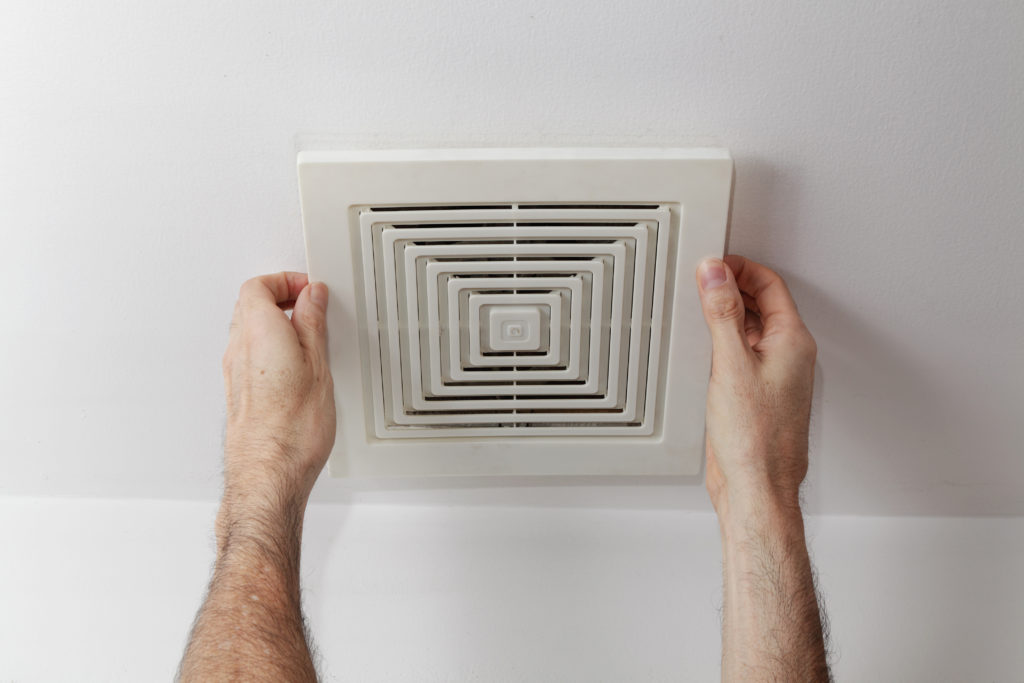 Mould is unfortunately very common in bathrooms, as the wet and humid conditions of a bathroom are the perfect environment for mould growth. A mouldy bathroom doesn’t only look bad, though, as it can also be bad for your health.

The area over the shower is the most likely area to be affected by mould. As steam leaves the shower, it hits the cold ceiling and creates condensation. This dampness will eventually seep into the plaster of the ceiling and lead to mould spores.
We’re here to tell you some of the best ways to remove mould from your bathroom ceiling and then how to prevent it from coming back.

How to remove mould from ceilings

If you already have mould on your bathroom ceiling, you can’t do anything about preventing further mould before cleaning what’s already there. The best way to remove mould from bathroom ceilings is to use a simple solution of warm water with detergent or a homemade cleaning solution of diluted bleach or white vinegar.
Before you start cleaning the area, be sure to wear a protective mask and gloves so that you don’t touch or inhale the mould spores. Wash the area with mild detergent and warm water and then let the area dry.
If you’re using diluted bleach or white vinegar to get rid of the mould, the process is a little different. To use the bleach solution, mix one-part bleach to one-part water and apply the solution with a cloth. To use vinegar, pour it into a spray bottle and spray it directly onto the mould. Leave it for an hour or so, and then wipe the area clean with water and wait for it to dry.

Ventilation can be a major problem in bathrooms, especially ones without windows, but installing a ventilation fan can often reduce mould and mildew build up in the bathroom. Most bathrooms will now have an extractor fan that removes warm and moist air from the room, but if this isn’t an option for you, you can increase ventilation in your bathroom by opening windows and doors.
Ventilation fans will remove odours and other contaminants whilst maintaining excellent air quality, and as a result – minimising the growth of bacteria.

Anti-mould paint is a specially formulated type of wall and ceiling paint that prevents mould from building up, even in areas with lots of condensation and air humidity. It can be a great first solution to stop mould returning once you’ve cleaned it away, creating a surface that repels condensation. Different brands of anti-mould paint offer varying levels of protection, but generally they’ll last for around 5-6 years.
However, anti-mould paint isn’t waterproof so you can still end up with water damage to your ceiling if it gets very wet consistently.

Ceiling cladding is a great way to prevent mould from occurring on your bathroom ceiling. It’s an increasingly popular option, especially in rented housing or hotels, as it’s easy to install and a stylish addition. Unlike a plastered ceiling that can absorb steam, PVC cladding won’t absorb steam, and therefore won’t get mouldy.
You can also use bathroom ceiling cladding over anti-mould paint for twice the level of protection. By combining both methods of mould prevention, you’ll be making your ceiling extra resistant to mould build-up by protecting it from getting wet.